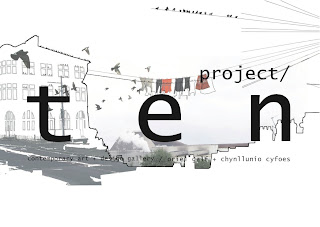 2010 saw the beginning of a new gallery collective in cardiff which features the most contemporary and progressive art and design in the capital.

Each artist and designer has a link with wales, and each stand strong in his own right. a new concept, and cardiff’s first design-focused gallery, project/ten builds a network of inter-disciplinary creatives as a platform for collaboration, dialogue and exposure, all in the name of progress.

If you missed the show, a selection of the collectives work is still on show on the stairwell leading up to the exhibition roon at Cardiff Arts Institute

In the meantime, the big fuss arts festival is happening at milgi, City road, Cardiff, over the first may bank holiday. project/ten will be making an appearance with a feature wall so head down and support what’s going on.

Finally a big thank you to Cat and Andy at project/ten for involving me in such an exciting collective!
Doing a super job guys!!